To ensure that your PowerPoint presentation opens in older versions, you can run Compatibility Checker to resolve any issues.

You might have experienced this scenario: you have created a presentation within PowerPoint, but you are not sure whether your client, boss, friend, or colleague, who has an earlier version of PowerPoint will be able to view and edit this presentation using the same options that you have used? And, if you save this presentation as a file compatible with an earlier version of PowerPoint, there are chances that you could lose some attributes of the presentation that are not available in previous versions. Or worse, your editable content could just change to flat, non-editable pictures! 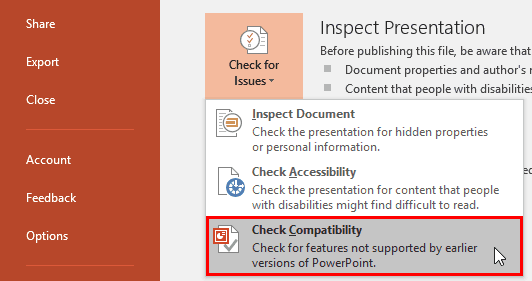 Filed Under: P
Tagged as: 16-01, PowerPoint Tutorials, Prepare for Sharing, Share and Prepare

Share and Prepare: Properties of a Presentation in PowerPoint »