The borders for tables that you create within PowerPoint are thin lines by default. You can change the thickness of these borders, but even before you do so, there are certain prerequisites to take care of. First of all, if you use Table Styles, then some borders may have been set to be invisible. So first of course, you need to set them to be visible since there’s no sense in thickening an invisible border. Once borders are visible, you can make changes to their appearance such as changing their color, line style, or the thickness of the table borders. 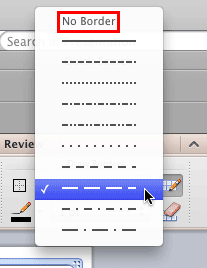